And I’ve been dying to get at this drawer for 9 years!

But it’s not mine, it’s Josh’s space. 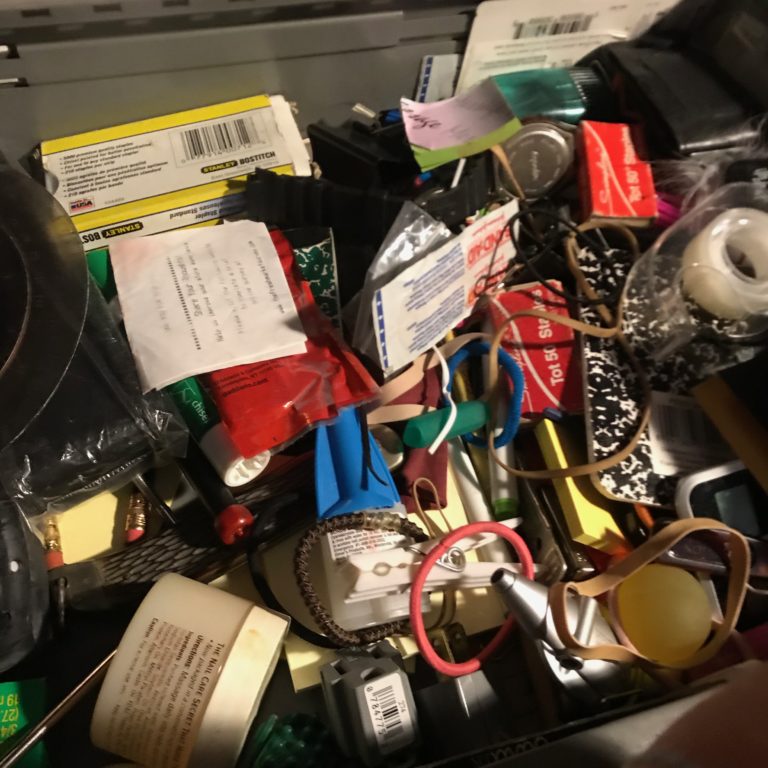 After all this time, he finally let me at it…

He was organizing his office and music space, so I casually asked about the drawer.

The moment he said “sure” and I wiggled the drawer off the runner, turned it over, and dumped the entire contents on the floor.

I looked at same pile of clutter, but now all in front of me on the rust colored carpet.

The drawer was empty!

I looked at the floor and the mess. And I dove in.

I did a quick run through of the obvious things, the things I absolutely knew he no longer needed…twisty ties and colored elastics the girls no longer use, broken crayons, pen caps without the pens, pencils with fuzzy gnome tops, old rubber balls, a 90s version of a Fitbit with a missing battery and broken band.

A mini stapler with miniature staples.

I don’t get it, Josh is 6 foot 3 inches…what’s he doing with a miniature anything? Hmmm, I ask “Do you still want this?”.

It’s not my place to judge, but I feel myself judging anyway. Why does he have this? I’ve been working on getting rid of that one…the stray thoughts of judgement. Some things are harder to let go of than others.

“Nope”, he says. Me: thinking “Ahhh, one less thing going back in the drawer.”

Next, I’m onto the things that are useful, that have a definite purpose. The things he will need. I put them into piles…ball point pens that rolled easily across the page, rubber bands, sticky note pads, paperclips, and band aides. Random things, but definitely things that help getting something done.

Sand paper? Yes, it belongs there in the left top drawer of his desk with the guitar pics and nail files. I knew this about him, but I had forgotten that he meticulously files and sands his nails while watching Netflix. He also finger picks his guitar to the theme of the shows.

I google “guitar players and nails” and reconnect with my appreciation for his craft.

There’s a joy in knowing what he needs…what’s important to him, even if I don’t always completely understand…

Yes. He wants to keep the squishy hand therapy ball that’s collected a fine coating of lint and cat hair. I breathe, ok.

He reaches out, I put it in his hand. He starts exercising his right hand as his left hand continues to pull floppy disks out of the storage cabinet. Lifting each disk up to his glasses which have been a part of him since he was in the seventh grade (probably the same year he received his first floppy in computer science class) to decipher the smudged pencil writing on the label.

(While reviewing this for a final edit, he tells me that he threw the therapy ball away after 50 more squeezes, saying “it was gross”.) Thank goodness, I agree, it was gross, who needs that?

I enter a time warp when I begin organizing.

It’s that happy space where time stands still and you’re completely immersed in the moment.

I’m filled with joy. Seriously the Joy of Organizing.

I’m completely content being here and I wonder what changed in Josh since the last time I asked.

Why did he let me get at it this drawer after all these years?

Maybe it’s because I stopped asking…insisting that I organize a space that’s his and not mine.

I was a bit much when we first met. Disguising my need to organize as a helpful task meant for solely him. (I’ve been working on clearing my own internal spaces)

Or maybe he’s become more comfortable with the overwhelming disorder that inevitably happens in the process of creating order.

Like the time I decided to paint and reorganize the bedroom and pulled everything into the living room.

The living room was overflowing, Just piles of crap everywhere, practically pouring out the back door. There was no space to walk. No space to think.

The bedroom was inspiring, completely cleared out, clean, and ready to reconstruct.

There’s a discomfort or even a panic that sometimes shows up when you dump it all out and see it all spread out right there in front of you. I feel it too. I always forget this part of the bigger projects…that raw, anxious feeling in my chest when I wonder how long it’s going to take.

Why did I do this? I had no idea there was so much in there. Look at it all right there in front of us.

I wonder, “Will I really be able to create order out of the chaos of it all?”

Josh used to become visible stressed out when everything was laid out like that. I don’t see that in him now.

I imagine it’s because we’ve both grown a ton over the years. I’m less insistent that it needs to be done on my timeline. I’m more patient.

And he’s become more comfortable with the process.

He’s been journaling a lot lately. A habit I started years ago. Every morning he journals before work.

He’s gotten in the decluttering loop: 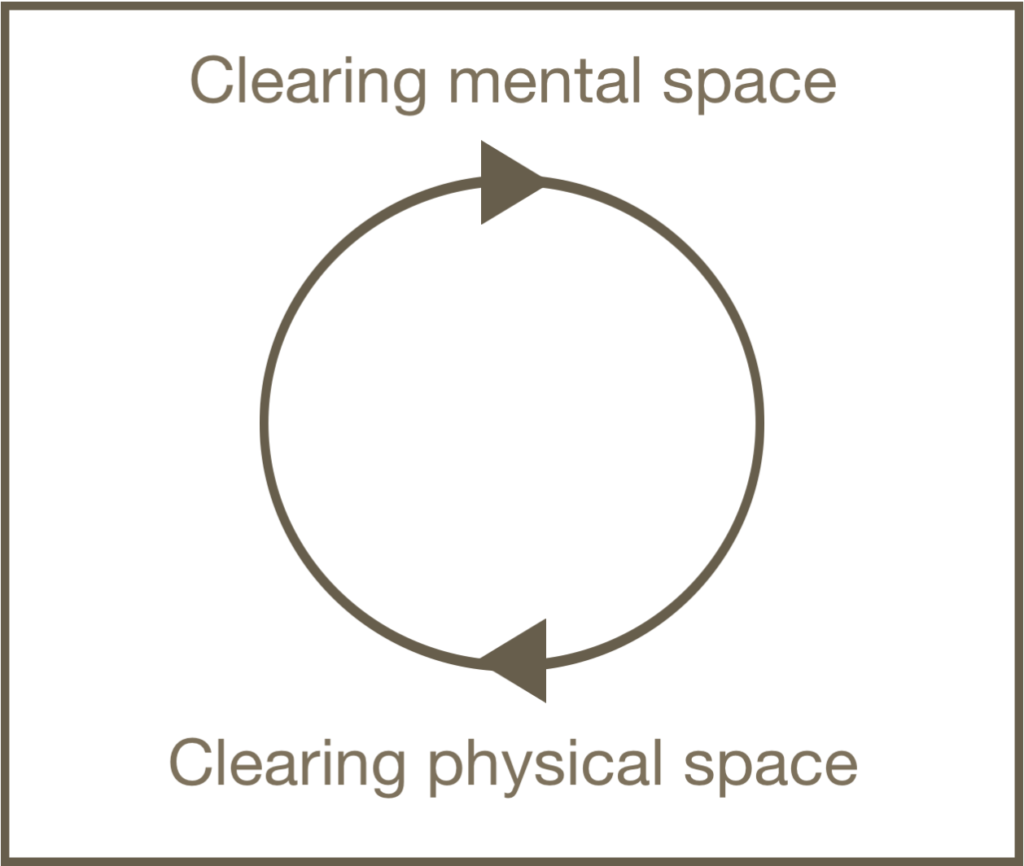 They feed off each other. It’s a beautiful loop.

…this is for you if you’ve created your meditation space, but haven’t found the time to sit down and meditate…your space is calling you, but you’re still pushing through your day, trying to get it all done. 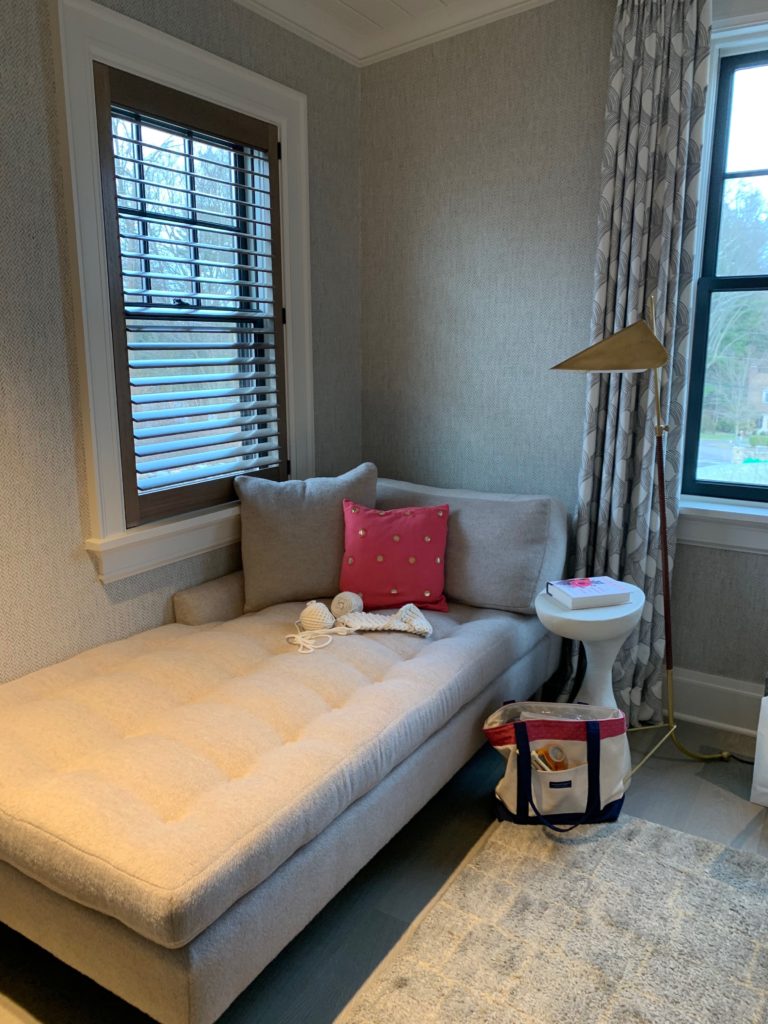